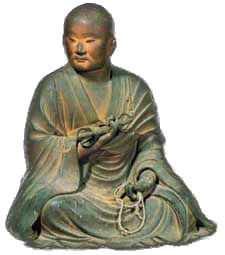 One day, in the course of my calls on eminent Buddhist teachers of the capital, I happened by chance to meet the abbot of the East Pagoda Hall of the Green Dragon Temple. This great priest, whose Buddhist name was Hui-kuo, was the chosen disciple of the Indian master Amoghavajra. His virtue aroused the reverence of his age; his teachings were lofty enough to guide emperors. Three sovereigns revered him as their master and were ordained by him. The four classes of believers looked up to him for instruction in the esoteric teachings.

I called on the abbot in the company of five or six monks from the Hsi-ming Temple. As soon as he saw me he smiled with pleasure, and he joyfully said, 'I knew that you would come! I have been waiting for such a long time. What pleasure it gives me to look on you today at last! My life is drawing to an end, and until you came there was no one to whom I could transmit the teachings. Go without delay to the ordination altar with incense and a flower.' I returned to the temple where I had been staying and got the things which were necessary for the ceremony. It was early in the sixth moon, then, that I entered the ordination chamber. I stood in front of the Womb Mandala [maṇḍala (skt.) मण्डल „Kreis“, schematische Darstellung der kosmischen Ordnung (jap. mandara 曼荼羅)] [Garbha Mandala] and cast my flower in the prescribed manner. By chance it fell on the body of the Buddha [Buddha (skt.) बुद्ध „Der Erleuchtete“ (jap. butsu, hotoke 仏 oder Budda 仏陀)] Vairocana [Vairocana (skt.) वैरोचन „Sonne, sonnenhaft“, Buddha-Name (jap. Birushana/Rushana 毘盧舎那/盧舎那 oder Dainichi 大日)] in the centre. The master exclaimed in delight, 'How amazing! How perfectly amazing!' He repeated this three or four times in joy and wonder. I was then given the fivefold baptism and received the instruction in the Three Mysteries that bring divine intercession. Next I was taught the Sanskrit formulas for the Womb Mandala, and learned the yoga contemplation on all the Honoured Ones.

Early in the seventh moon I entered the ordination chamber of the Diamond [vajra [vajra (skt.) वज्र „Donnerkeil“, Ritualinstrument und Symbol des tantristischen/esoterischen Buddhismus (jap. kongō 金剛)]] Mandala for a second baptism. When I cast my flower it fell on Vairocana again, and the abbot marvelled as he had before. I also received ordination as an acharya early in the following month. 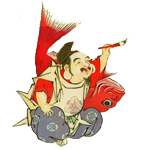